Chicago 1: The South Side & Regina

A beautiful sunny, warm day in ultra-civilised Chicago began with a wander in Grant Park. Everything takes just a bit longer than you expect because of waiting to cross the enormous roads. So then I hurried to the Metra to head southwards only to discover one of those things that everyone knows and no-one tells you: while the CTA El trains are superb and as frequent as London tubes, the Metra is a rarified form of transit for those people who don’t mind waiting 40 minutes for the next one! So I had to rush straight out and hurtle into a taxi 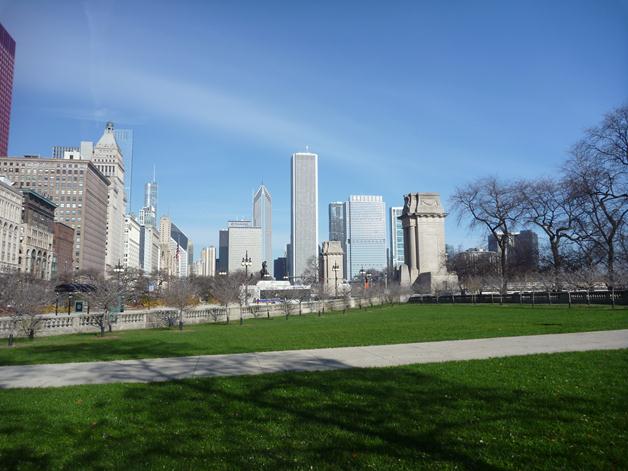 I met with Caroline Oewerkerk and Trudi Langendorf at the University of Chicago, pausing to take a quick pic in front of Frank Lloyd Wright’s building. 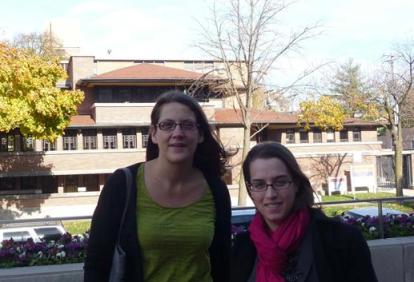 Caroline (pictured) manages the University of Chicago Urban Network, while Trudi is in charge of the Community Service programme that offers opportunities for students to learn in different ways, through placements rather than books. Michelle Obama was Executive Director of the programme in the early 1990s.

They described the deep and far-from-glorious history the university has in the South Side area. Caroline told me her own version of the legend of Woodlawn, famous in the history of organising and the subject of many dissertations including Caroline’s: The area went from 98% White to 98% Black over 20 years (1965-1985), lost 80,000 people and went from 60 grocery stores to 10. Alinsky united the Woodlawn community in opposition to UC’s plans to erect a giant fence between the Uni and the community. UC was lobbying for Woodlawn to be declared a slum and cleared which would enable the Uni to build on the land. The community united in opposition to form the Woodlawn Organization (TWO). They had great ideas but many didn’t come to fruition. They won the largest contract for federally subsidised housing but were simultaneously being investigated for embezzlement. Caroline argues it was unsustainable anyway because it focused too much on housing and campaigned against transportation. There are still many vacant lots in the area that were bulldozed but unbuilt. The neighbourhood continues to campaign against actions by the university such as the closure of the adult trauma center.

I know there are many ways to tell these tales [eg. see
http://wecanwoodlawn.community.officelive.com/aboutus.aspx to understand these were not the same organisations anyway] but whatever the details, both historical and contemporary – there is no doubt that the University of Chicago plays an ambivalent but important role in the story. It will always be remembered as doing sociology to the community (what we call ‘neighbourhood data mugging’). Its physical and social impact on the area is self-evident, though whether that’s ‘for the good’ is a question for local people and its complex implications are for historians with more time than me. I asked if the university has any way of listening to local concerns. There is an Office of Civic Engagement but this is “at a high level”. The general story is familiar to me from Deptford, SE London – a well-intentioned but paternalistic university, embedded in a poor neighbourhood, preaching radical anti-poverty in its sociology lecture halls while the estate management rides rough-shod…

So then I expressed back north to the Loop on the #6 bus to meet the fabulous whirlwind that is Regina McGraw of the Wieboldt (‘WEEbold’) Foundation and knew what my favourite funder would be like. 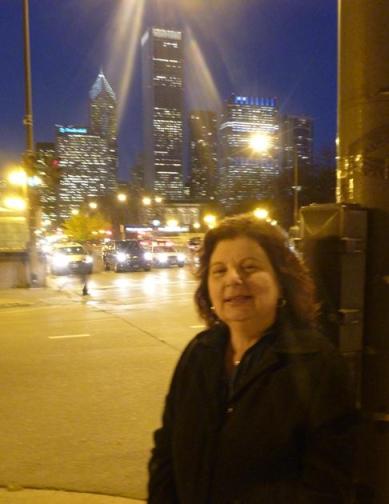 Wieboldt is 90 years old, founded by a German immigrant couple who owned neighbourhood stores. Their $2m is now worth $17m (even after the crash). Originally funded direct services but in the 1960s Regina’s predecessor Bob Johnson convinced the board, which includes four community members, to focus on organising. They look for a defined leadership development programme (not just learning by doing), evidence of local support, seeking public policy change, and ‘playing well with others’. Most grantees are neighbourhood based. The ‘product’ is leadership development because the working poor don’t get those opportunities AND public policy change AND sometimes self-help solutions like the Grow Your Own Teacher work done by Logan Square Neighbourhood Association. When organisers come to Wieboldt they usually know the issue they want to work on because they’ve already been doing the listening. Sometimes they come at an earlier stage, in which case they must have a clear plan but no predetermined issue.

Regina took me under her wing, sweeping me up to an event at Mercy Housing, a celebration of tenant leaders in SROs (single room occupancy – like our HMOs houses of multiple occupation). We were too late for the main event but got to meet some of the organizers, had a tour of the facility and a gripping lecture from one resident about the meaning of democracy. Two days later she called to invite me to the big Occupy Chicago event at LaSalle – she’s that kind of funder! The US equivalent of the redoubtable Julia Unwin.

“The first wave of organising was by white men and it was a blood sport. Now there are more African-Americans, more women… The second wave knows how to do the web.”

“The big lesson in the US has been the vetting of people at the table. Can you depend on them to be speaking for a lot of people? You have to agree to the campaign and you have to have something to bring to it – ideas and fast talk are not enough. Organising is working class not middle class – it’s more important to get things done than to be polite. The Grassroots Collaborative is a successful ongoing organisation, the most diverse coalition across the whole city. To join you have to have a base (defined as two buses of people to a big meeting).” Another interesting model, particularly for Locality members, is that of Organisation of the North East – a very successful organisation in which social service agencies become members of ONE, giving access to their service users to become involved in organizing. This allows the agencies to support advocating for policy change by the grassroots – it gives them cover.

Next post: Chicago 2: More inspiration than I can do justice to (planning to write it up on the train to Birmingham tomorrow before returning fully to the real world of community organising and pier-saving in England!)

This entry was posted in Community Allowance, Community Organisers, US trip. Bookmark the permalink.

1 Response to Chicago 1: The South Side & Regina